That's Mister Sisyphus to You

The irony is not lost on me that I was on the treadmill when I got the call.  My casting director regretted to inform me that they had to table my project as they had just got in a feature that was shooting in five weeks and they were slammed.  I can't blame them.  A gig's a gig.  In this climate, no one can afford to pass on a job.  One that pays.  Mine doesn't.

Back to square one.

I had to release my primary shooting location.  I had harassed the poor occupants ceaselessly until they relented and gave me permission to shoot there.  Now there was no way I'd be ready during the window we had selected.  Trying to make lemons out of lemonade, I decided that the push in schedule would give me more time to raise money, tighten the script, storyboard, cast, crew up, etc. etc.  But the next window that makes sense to shoot in seems to be summer, because pilot season will be over (greater talent availability,) the house will be available again, and my eleven year old lead won't be in school.  But summer is so fucking far away that it makes the whole thing feel utterly abstract and unreal.  And nobody knows what they're going to be doing six months from now, so how can anyone sign on to work on the project that far in advance?

On the bright side, a church in my neighborhood has agreed to let me shoot there.  I wrote them an impassioned letter, describing the project with, shall we say, certain omissions, and they thought it sounded like a good idea.  Of course I don't actually like the church in terms of a location.  It's ugly and nondescript.  But I figure if they went for it, maybe others will too.

Oh, and how come nobody returns a godamn email in this town?  You all have Blackberrys and iphones - I know you can hear me.

I feel utterly deflated.  The wind out of my sails.  Running in place and getting a cramp.
Posted by Dave Rock at 9:47 PM No comments:

So I've officially lost my co-producer, Valesca.  She just had too much on her plate.  Oddly, it turns out it's somewhat difficult to find an intelligent, industry-savvy, hard-working, well-connected, creative, tenacious person who is ready to go to the mat for you and work tirelessly for two months, unpaid.  Who knew?

I've resorted to posting an ad on Craig's List and Mandy.com.  Cue the crazies.

(Okay, RE: the crazies comment: Don't be offended if you are in fact one of the intelligent, industry-savvy, hard-working, well-connected, creative, tenacious people mentioned above.  I'm sure you are only a little crazy.  More like eccentric.)

I've been on the phone all day with telecine labs and camera houses getting pricing and trying to figure out the implications of shooting 2-perf.  It seems finding the cameras won't be as easy as I thought.  Several of the big houses don't carry them.  I am putting together a proposal for the Panavision Grant.  Maybe I'll get lucky and they'll hook me up.

On the bright side, I heard from the casting people and they are almost ready to start casting this thing.  Having a cast would certainly make this thing feel more tangible, not to mention help attract other personnel.
Posted by Dave Rock at 9:27 PM No comments:

Out of the Frying Pan into the Fire

The past few days have been emblematic of the whirlwind of ups and downs that typify independent filmmaking.  I finally secured my main shooting location.  It took a while, but I eventually came to an equitable arrangement with the family that lives in the house.  It would mean shooting will take place during their kids spring break and I would fly them to Boston.  It's sooner than I had planned to shoot which makes me nervous, but eighty percent of the film takes place there and it is worth it to lock something down.  They signed off on it but said I had to first clear the hurdle of their daughter's refusal to let me shoot there.  I soon found myself negotiating with a nine year old girl who has a pathological fear of people seeing her home depicted in a film.  I sent her a specially tailored version of the script.  She sent me her short story.  I sent her back notes and title ideas.  The I offered to take her out for a giant ice cream sundae.  I think that's what finally sold her.  She grudgingly acquiesced.  Jubilant, I reported this to my co-producer and associate producer.  It turns out the associate producer can't participate if we shoot that week.  It's a drag, but I have to move forward.  Then a couple days later, my co-producer tells me that she is up for this prestigious AFI women in film program and if it happens she will have to excuse herself from this project.  Great.  So I have a location.  But no producers.
Posted by Dave Rock at 12:21 PM No comments:

This is what all the fuss is about?

This is the American Burying Beetle.  It's almost extinct.  It serves as the central metaphor in my story. 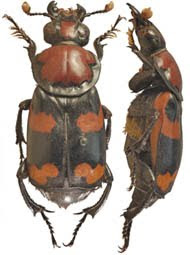